A few small projects which may inspire you to do something similar.

Picture frames (I made 3 nesting frames)

My decision to make frames in this way was in no way influenced by my inability at that time to make good mitred corners. (Well, that's my story and I'm sticking to it!) Now that I have access to saw guides, of course, I have no problem with mitres. 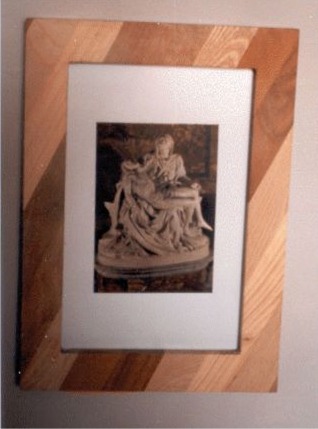 Pieces of different woods (pine, yew, oak, ash, teak, sycamore etc) were sawn into strips, planed to size and then glued and cramped together. After the outer edge was cut square using a dimension saw, the inner edges of all 3 frames were routed out using a very small straight cutter. A rebate was routed on the reverse of each frame, and the frames were sanded and waxed.

A different use for a nice piece of timber.

This piece of burr elm was shaped using a jigsaw (often set at 45 degrees), and I attempted to follow the grain of the timber wherever possible. After this all I did was sand the face and cut out a hole for the barometer to fit into, before varnishing the finished item and hanging it on the wall. If you are considering something similar, the shape of your timber may suggest that a clock, thermometer or hygrometer would also fit in.

A good example of my opinion that some pieces of timber are too nice to be machined.

All I did to this was glue some extra bark pieces to one end to disguise the saw cut before sanding and varnishing it. I also cut a piece of MDF slightly smaller and attached this to the back. Slots were cut in the MDF to hang the finished piece.